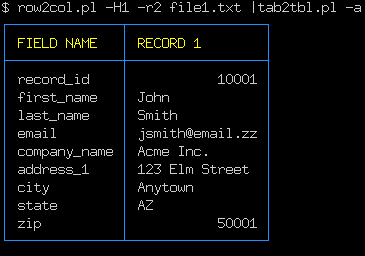 Posted by Miguel Gualdron at 3:16 PM

I work a lot with delimited flat files, and a good way to display them in plain text is to create an ASCII table.  The attached script, tab2tbl.pl uses the Text::ASCIITable module and can convert an incoming tab-delimited file to a nice looking table.

Here's an example of a simple input file: 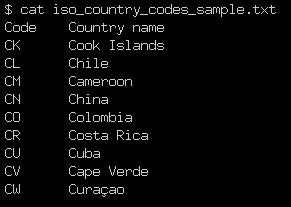 Below is what it looks like after formatting is applied: 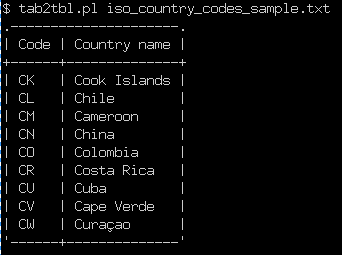 If we are formatting UTF-8 data, not only are some of the characters encoded in more than one byte, they can also take up one or two spaces on the screen.  The latter are referred to as double-width characters, and many CJKV glyphs fall into this category.  See this proposal for a more detailed description.

If we use Text::ASCIITable without modification, it is not able to distinguish between single and double-width characters, so the output doesn't always line up.  Here's a sample: 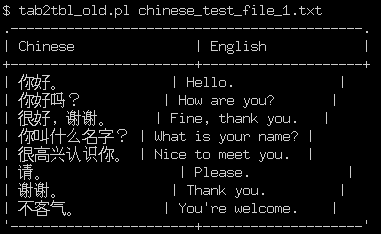 However, the module gives us the option of defining our own count call-back function, so we can correct for this, by making use of the mbswidth() function in the Text::CharWidth module:

Once this is in place, we get the following: 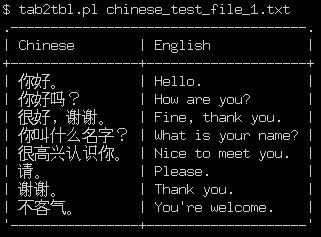 The script also provides output using ANSI color codes (if your terminal supports them) using the -a option: 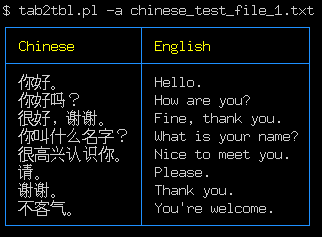 You can download the files mentioned above here: tab2tbl.pl, chinese_test_file_1.txt.
Posted by Miguel Gualdron at 5:52 PM

Here's a simple way to access Salesforce data even from behind a firewall, using Perl and the REST API.

If you're not familiar with the details of the Salesforce REST API, have a look at the developer docs.

Since I'm behind a firewall, I have to define the necessary variables so the various Perl packages can route the requests properly.  Here's what's needed:


#!/usr/bin/perl
use warnings;
use strict;
use WWW::Mechanize;
use WWW::Salesforce;

If you don't need to go through a firewall, you can skip all of these proxy settings, but you'll still need the $mech definition, as it will be used to make the REST requests later.

The most difficult part (and it wasn't difficult) was setting up the authorization.  Salesforce offers two options:
The Sesion ID is far easier than the first option, so I'm using it here.

The first step is to log-in via the SOAP API (since that is a way to get a session ID):

Now that we've logged-in via the SOAP API, we have a session ID as part of the $sforce variable, which we can get as follows:

This SID will need to be sent as part of our request header when using the REST API.

Here's a simple request for all available SObjects:

The developer doc mentioned above lists lots of examples for requests that can be made this way, including SOQL queries.
Posted by Miguel Gualdron at 3:08 PM

I was tasked with generating flat-files from Microsoft SharePoint
lists recently, for loading into a database, and wanted to share one way of
doing this, which involves downloading the XML with a tool like wget or curl,
and then parsing it using a Perl script.
Unfortunately, I did not have access to the back-end, or I might have looked
for a way of running a query on the SQL Server database behind the SharePoint
application.
There are also other ways of doing this that involve the use of SOAP::Lite.
Have look, for example, at this great post.
For this particular exercise I had access to a SharePoint 2007 site. Your
mileage may vary with a more recent version.

Before we can pull the XML from SharePoint, we’ll need the URL for the XML
version of the list we’ll be extracting.
From the SharePoint site for the list, export the list as an Excel
Spreadsheet. This will cause the site to push an file called owssvr.iqy as
a download to your browser. Save this file and open it with a text editor.

Here’s what the downloaded web query file (owssvr.iqy) might look like:
The URL listed on the third line of the file will point directly to the XML for the list. The list ID itself is shown as the attribute SharePointListName, and is also part of the URL.

For the SharePoint site I’m querying I have to use HTTPS, and it requires
authentication. Using the link obtained above, I can download the XML for the
list as follows (type the whole command into a single line):
Note: Even though the curly braces ({, and }) in the URL are not valid
characters for a link, wget is able to use them, as it is encoding them behind
the scenes into %7B and %7D respectively. BTW if you need to encode
strings into valid URL format, have a look at URI::Escape.

Curl requires more strict URL encoding, but downloads the XML just as
well with the below command (again, put it into a single line).

Structure of the XML

Here’s a sample of the XML obtained with either of the commands above. In this
example I’m querying a list of tasks.
There are three main sections
(1) The XML header, enclosed in the topmost <xml> tag.
(2) The schema or data description. Surrounded by the <s:Schema> tags.
(3) The data. Enclosed by the <rs:data> tags.
The strategy then, is to parse the schema first, and after having all
available attributes, we can then parse the data section to output
delimited columns.

I’m using Perl 5.12.1 with the below modules:
XML::Simple allows you to choose a preferred parser, and I chose
XML::LibXML::SAX::Parser, since it supports name spaces, which are used in
the XML.

If we’re just interested in the data, we can call the script as follows:
And it will give a tab-delimited file.
You can also output the schema of the list with the following command:
I’ve reformatted it into an ASCII table below:

Overall this code is fairly reusable as the structure of the XML is consistent
across various SharePoint lists. And since it is scriptable, it is easy
automate the update of a database table from a SharePoint list.
You can download the files mentioned above, here: xmlparse.pl,
test_list.xml.
It is possible to do the download step in Perl as well by using LWP::UserAgent,
but this is left as an exercise.
Posted by Miguel Gualdron at 2:16 PM